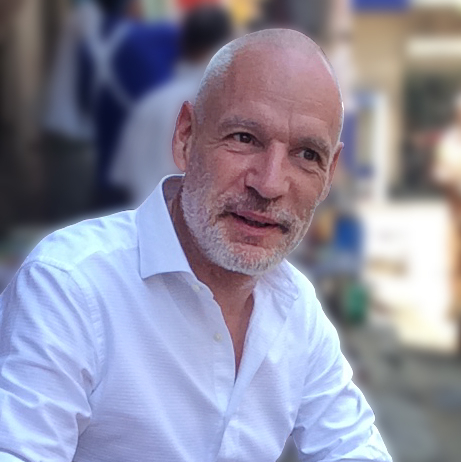 Architect, urbanist and theorist Holger Gladys was a man of many traits. He was a very good listener, a sharp analyst, and an excellent tutor. Following his love and curiosity towards the city, he explored both center and the fringes, uncovering invisible social and spatial layers. Connecting various worlds, and getting past the binaries of black and white thinking, he recently engaged with the re-positioning of the global South on the agenda of critical reflection and space-making’.* Always eager to learn and observe 'Holger has continually reinvented himself’.** He passed away much too early, on Sunday 10.07.2022 he joined Cairo’s City of Dead.

‘Gladys graduated from the Cologne University of Applied Sciences and from the research-based Berlage Institute in Amsterdam. In addition to having been a practicing architect in the Netherlands, between 2003 and 2016 he has been Associate Lecturer at the Amsterdam Academy of Architecture, and in parallel between 2010 and 2016 Research Associate at the Weimar Bauhaus University. He has been a member of the Weimar Institute for European Urban Studies and in 2013 Guest Professor at the Virginia Polytechnic and State University, Washington Alexandria Architecture Center. Recently he became a member of the Egyptian Urban Studies Network. During the course of 15 years, he has been a Master Thesis Committee Member in Amsterdam, Weimar, and Leuven; Guest Critic at design studios in Delft, Stuttgart, Innsbruck, Washington DC; and Visiting Teacher during international summer schools in Amsterdam, Istanbul, and Porto. *

His active teaching at the Amsterdam Academy of Architecture lasted for more than ten years. After obtaining his latest position as Associate Professor of design and theory at the German University in Cairo he remained engaged with Amsterdam Academy by running parallel cross-continental studios between Amsterdam, Cairo, and Accra. The opportunity for Amsterdam Academy students to deeply engage in the layered periurban conditions of Giza and Nile Delta was a life-changing experience for most students. Similar learning from Accra - Prambanan studio went beyond the binaries of perception engaging with Dutch and Egyptian students with a Ghanian condition. His Cairo students were reoccurring surprise among the prize-winning competitions in the Global South for several years in a row (Mumbai competitions). While tutoring thesis at Amsterdam Academy of Architecture he had many graduates. His writings were included in various publications like 'Don't Trust the Idyll', Meritorious Objectives and Arguable Substance in Dutch Suburbia – in Barbara Schönig (ed.), 'Variations of Suburbanism', Approaching a Global Phenomenon. ibidem Verlag, Stuttgart (2015) and Columbia University Press, New York (2017), ‘Notes from the land of Forgetting’, In Search od a Garden to Drink Tea - K.Y. Goessinger - L. Hrsak (ed.) (2021), 'Post Colonial Hangover' with D. Wahdan (2021).

Practicing education, experimenting with educational techniques, and questioning the notions of learning and unlearning made him one of the most appreciated lectures. Parallel with the embodied research on-site, on a precise scale, and in the class, he was building up the library with unique sets of books, tricking his students to read the latest publications and discuss the texts. Building upon his legacy we may want to keep reinventing ourselves, continue experimenting with the educational techniques, and overcoming binaries. Yet first and foremost he was a genuine intellectual and wonderful warm person. We will miss him.

Our hearts go to his wife Dalia and son Victor.