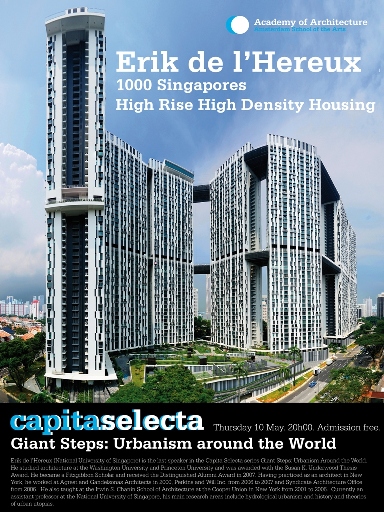 Erik de l’Hereux studied architecture at the Washington University and Princeton University and was awarded with the Susan K. Underwood Thesis Award. He became a Fitzgibbon Scholar and received the Distinguished Alumni Award in 2007. Having practiced as an architect in New York, he worked at Agrest and Gandelsonas Architects in 2000, Perkins and Will Inc. from 2006 to 2007 and Syndicate Architecture Office from 2006.  He also taught at the Irwin S. Chanin School of Architecture at the Cooper Union in New York from 2001 to 2006.

At the last night of the Capita Selecta lectures series he will speak about urban housing in Singapore: '1000 Singapores: High Rise and High Density Housing'.

Giant Steps
The Capita Selecta Series ‘Giant Steps’ explores various approaches to urbanism around the world. The compass for debate will be how urbanism is embedded in various planning cultures. The lecturers in the ‘Giant Steps’ series act as designers or have conducted thorough research on urbanism in a specific national context. Besides new innovations in design and construction of the city undoubtedly the role of (geo)politics and decisionmaking in the process will be discussed. This lecture series is co-ordinated by urban designer and head of the Department of Urbanism Rogier van den Berg.

Date and location
Capita Selecta is a series of lectures, organized by the Amsterdam Academy of Architecture, dealing with thematic, topical subjects in the field of architecture, urbanism and landscape architecture. The lectures are open to the public and take place at the Academy, Waterlooplein 213, Amsterdam. All lectures start at 20h00. Admission is free.