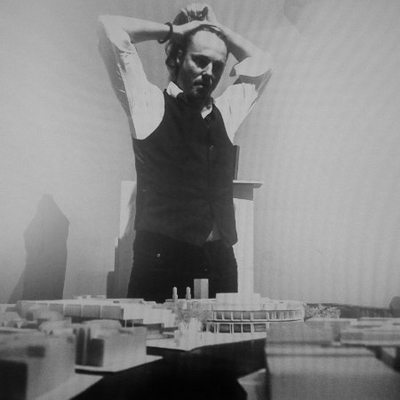 'In my quest to create a modern monument I focused my research on the Stopera: an architectural phenomenon on the former island of Vlooienburg in the historical city centre of Amsterdam. The Stopera today combines the City Hall of Amsterdam and the Dutch National Opera & Ballet (stadhuis + opera). My ongoing quest transformed into a desire to end the current pejorative ‘Stopera’ and to reveal the hidden monument in the Stopera complex, embedding it in the surrounding urban fabric.

This extensive research and analysis resulted in a clearly defined plea recorded in a 150 paged-book full of high quality illustrated analogies, metaphors, diagrams and drawings showing the potential of the existing Stopera. The book describes the spatial and symbolic relationship between several monuments of Amsterdam on different scales. The outcome is a high potential strategy to transform the 129,000m2 Stopera building into the new city centre for Amsterdam by using nearly 80% of the existing structure.'

As an archaeologist and sculptor combined, Hein van Lieshout re-evaluated the Stopera, discovering, and freeing, the Houses of Apollo and Dionysus. As inter-related planets revolving around the sun, the new Amsterdam City Hall and National House for Opera and Ballet re-emerge as Siamese twins liberated. Embraced and re-designed, the House of Apollo and House of Dionysus redefine the heart of the city.